Change recycling behaviours with the Internet of Things

Why don’t we recycle more? This is a question that 8 years ago the team behind recycl3R put on the table to try to solve it and propose a solution. At the end, we concluded that there were two factors that had a direct and significant impact on this reality: information and incentives.

Today we still have doubts when it comes to sorting and recycling our waste. Surely you’ve ever wondered where you should throw away any packaging or product you had at home. Although it may seem unreasonable, it is a very normal situation and we, who have been in the environment and recycling sector for more than 15 years, sometimes ask ourselves the same question.

But, although we do not have these doubts or we can solve them easily, we still need a very important element, something that makes us dedicate our time and energy to recycle more and better, or simply recycle, as we all lack the time and energy to do everything we would like to do in our day to day. We need incentives, rewards, prizes, whatever to make us improve when it comes to recycling.

What we quickly saw is that using the Internet of Things would help us do those two things: inform the consumer of how to sort and recycle a packaging item and then reward him if it was done correctly. We could serialize (provide a unique code) a packaging item and make the consumer scan it to unlock a new communication channel with the company that has put that product on the market.

A Europan project and a pilot

Based on all this reasoning, we started talking to many companies and we ended up presenting with another 14 companies a European project that worked in that line. Although it was almost impossible, we got the project and the European Union, in the framework of its Horizon 2020 research and innovation initiative, financed with almost 7 million euros what was finally called the TagItSmart project.

Within this project, the team behind recycl3R led the case of use of recycling, or what we call life cycle management, and we launched, among others, a pilot project in real environment with Carrefour Spain and 10 CPG companies like Coca Cola, Henkel, PepsiCo, Procter & Gamble or Unilever. We called this pilot project ReciclaYa and it was publicly proposed as a temporary recycling campaign so that consumers and users would not see it as a test without further projection.

The functionality for the user was relatively simple. You had to download a mobile application with which you could scan the Carrefour shopping receipt to include all the products you had purchased and get information to sort and recycle them correctly. To get points, users had to indicate in the application that they sorted the products once they were consumed and at the time of recycling, they had to scan the QR or NFC codes of the more than 10,000 recycling bins that had been labeled in the two cities of the pilot (Palma de Mallorca and Logroño).

The technological system behind 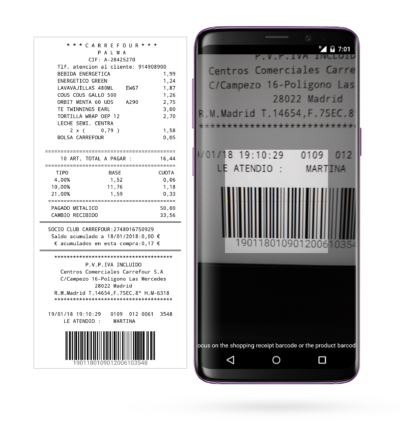 Despite looking like a simple system, in this pilot we merged different technologies to provide unique digital identities to the products purchased through a unique and serialized shopping receipt. These unique identifiers provided us with information on the unit of product purchased despite only including generic barcodes that did not allow us to identify the specific unit. In addition, we used digital (QR codes) and electronic markers (NFC tags or short-range communication) in the recycling bins to identify and interact with them and achieve new features impossible to achieve in an analog way. This entire technological system was based on the recycl3R information and rewards platform, but also on the EVRYTHNG Smart Products Platform and the NFC digital printing and labeling system of  Thinfilm, two European project partners that later became strategic partners of recycl3R. Without them and without their experience and great dedication to the project the results would not have been as successful as they were.

A behavior change and an improvement in sorting and recycling

In the 4 months that the pilot lasted, more than 85,000 products were recycled that if they had not been recycled they would have resulted in the emission of almost 2 tons of CO2 equivalent to the atmosphere.

Thanks to the rewards offered, this recycling work was allowed to be done correctly and by people who otherwise would not devote any effort to it. In those 4 months we achieved a large number of users who used the application for recycling and a behavior change in more than 7% of those users who did not even recycle at home before using the application. If we also take into account users who only recycled a waste category (fraction) or did it incorrectly, we can say without a doubt that this system of information and rewards for recycling promoted a change in behavior and allowed to correctly separate all the waste that was generated in those homes.